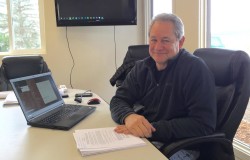 The vast majority of recyclable materials from the Roaring Fork Valley are being shipped across the Pacific Ocean. That’s according to a major area trash and recycling hauler. Recycling has been a hot topic among leaders in the Valley, as the price of collecting and trucking plastic, glass, and other materials out of the area is getting more expensive.

“The chances of your recyclables going to China are probably in the 95% – 100% range,” says Scott Eden. He’s founder and President of Carbondale-based Mountain Waste and Recycling, the combination of the two companies Intermountain Waste & Recycling and Mountain Roll-Offs, Inc. “And there are a bunch of factors, that none of us control, that impact [sending recyclables to China].” Ingredients include commodities prices and how far away Colorado is from industrial plants in the US. It can be notably expensive to get a used can or plastic bottle to one of those sites, in order to melt down resell the materials. Those and other issues add up to it being cheaper for companies to send recyclables from Denver to Southern California, then China. The irony is the price of recycling isn’t going down locally. “It’s literally costing us over $100 a ton,” laments Eden, “to collect, transport, and ultimately take our recyclables to a facility.” That’s about twice the cost for Eden’s company to send trash to a local landfill, in part because more and more recyclables containers are having to go all the way to Denver. Diesel for trucking them there adds up, and the receiving center charges more for Eden to empty his trucks. Carbondale officials have considered allowing companies to charge customers more to help offset those costs, but Town Trustees decided against those and other changes this week.

Read the rest and listen to Scott’s interview »